Debbie Leven on meetings and agendas, in 140 characters 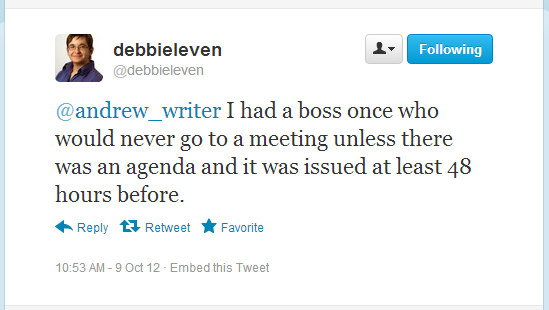 This Tweet by Debbie Leven from PRCoach Blog caught our eye, just because it sums up so many meeting issues in less than 140 characters, which is no mean feat.

When you go to a meeting there HAS to be an agenda. Agendas are the focal point of the meeting. If the meeting has no agenda, then what you have is a set of loosely connected discussions, a stream-of-consciousness style of debate.

– “Have you seen that latest feature? It looks like Apple designed it!”
– “Apple? Really? Because I heard that their business model is based on advertising. Perhaps we should advertise as well?”
– “Advertising? What, like the latest Facebook ad about chairs? Maybe our company can be represented by Koala bears?”
– “Speaking of Australia, did you know….”

And so it goes on.

Agendas are a must. If you are the meeting organizer, write one. If you are a participant, demand one, and ask that it be sent to you in advance.

If there isn’t a meeting agenda, just say no! 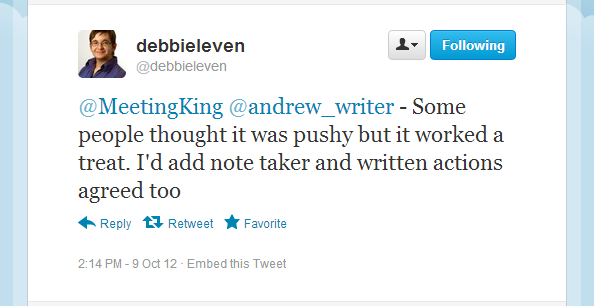 And yes, you need those too.

Edwin is the former CEO of WinZip Computing as well as VP of sales of the largest electronics and appliances retail chain in The Netherlands and VP of commercial affairs of a large retail chain in Peru. In all these capacities he attended and chaired many meetings and was frustrated by the lack of an integrated tool that followed the entire workflow around meetings from preparing the agenda, writing the minutes to manage tasks. There are many task management tools and note-taking solutions, but nothing covered all stages of a meeting. After leaving WinZip Edwin started Meeting king to help people have more effective meetings.